Venous ulcers, also referred to as stasis, insufficiency or varicose ulcers, are the result of malfunctioning venous valves causing pressure in the veins to increase. These typically occur along the medial or lateral distal (lower) leg. The resulting venous hypertension causes blood pooling when it is not as efficiently pumped back towards the heart, otherwise known as venous insufficiency. In addition, the increase in pressure stretches the vein walls, allowing proteins in the blood and blood cells to leach into the subcutaneous tissues, resulting in edema and the eventual breakdown of said tissues due to lack of oxygen and nutrients. Specifically, deposits around the capillaries of the protein fibrin, which normally plays a role in clotting, prevent oxygen and nutrients from flowing to the surrounding muscle and tissue and in turn lead to necrosis and ulceration (Fibrin Cuff Theory).

Veins are responsible for carrying deoxygenated blood back to the heart from various bodily tissues. The venous system operates at relatively low blood pressure, relying on the contraction and expansion of skeletal muscles to propel blood past the one-way valves in the veins on its way back to the heart. The circulatory system relies on this pressure gradient to push blood through the arteries and into the veins.

Whe a venous ulcer begins to develop, stasis dermatitis may be present causing scaling and erythema of the lower extremities. Hemosiderin staining may also occur, causing the presence of brownish or yellow patches underneath the skin. Other skin changes may include the appearance of dark red or purple as a result of blood leaching into the surrounding tissue. Venous ulcers will present with shallow but large wounds with irregular margins that typically develop on the lower leg or ankle. The base of the ulcer is typically red, can result in a significant amount of exudate depending on the level of infection, and will ooze venous blood when manipulated. Typically the wound will be relatively painless, with any pain resulting from subsequent infection or edema. Often the entire leg will become swollen, and the skin will become more firm and reddish brown in color, otherwise known as stasis dermatitis. Elevation of the limb will help to relieve discomfort and swelling. 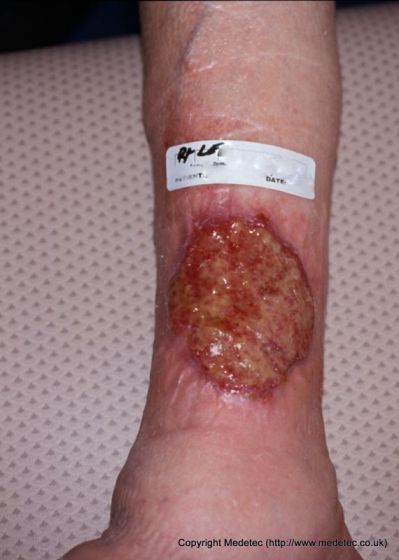 Any condition that causes blood to pool in the veins of the leg is a potential cause of venous ulcers, including varicose veins, deep vein thrombosis, or heart failure. Most venous ulcers are caused by venous valves that do not properly prevent the backflow of blood, or venous reflux, from deep veins back to the superficial veins located between the skin and muscles. In addition, any condition resulting in muscle weakness in the lower leg can in turn decrease the skeletal muscle's effectiveness in propelling blood back towards the heart.

One of the most typical complications associated with venous insufficiency ulcers is infection of the affected tissue.

In directly treating venous ulcers, the primary goals are keeping the ulcer site infection-free during the healing process and alleviating edema of the site. Debridement to remove dead tissue and surface contamination may be used to change the wound from chronic to acute, at which point it can progress through the regular stages of healing. Maggots or biotherapy may also be suggested as another method of removing necrotic tissue from the wound. Typically, oral antibiotics are only necessary if there is an infection in the surrounding tissue. The wound environment should typically be moist, with dressings changed as infrequently as possible due to the fact that changing dressings removes both healthy cells and debris. In extreme cases, surgical skin grafts can be used in order for abnormally large or painful venous ulcers to properly heal.

In addition to treating the superficial wound and edema, the secondary goal in treating venous ulcers is to alleviate the underlying condition. One of the most common treatments is compression therapy, which serves to decrease blood vessel diameter and pressure, increasing effectiveness and in turn preventing venous reflux. However, compression should only be used in patients without significant arterial disease, as it would only then exacerbate extant conditions. Compression wraps or other compression devices may be suggested in the treatment of eligible patients. An Unna boot extending from the toes to just below the knee can also help to promote healing, reduce infection and promote blood return to the heart. The boot consists of moist zinc or zinc and calamine impregnated gauze which is allowed to harden then wrapped tightly with an elastic bandage.

The following precautions can help minimize the risk of developing venous ulcers in at-risk patients and to minimize complications in patients already exhibiting symptoms:

The following section identifies specific products that are appropriate for the management or treatment of venous insufficiency ulcers, according to the companies who chose to list them here. This list is not all-inclusive; other products listed on WoundSource.com may also be indicated for this condition.